The SEM/PSD and XRD/EDC contamination analysis identified 66% of the wear particles were under 4 microns with 13% of that under 1 micron. The remaining 21% of wear particles ranged up to 127 microns in size. 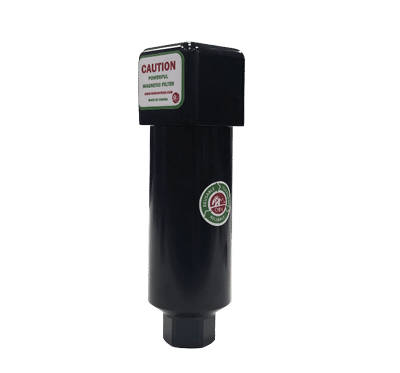 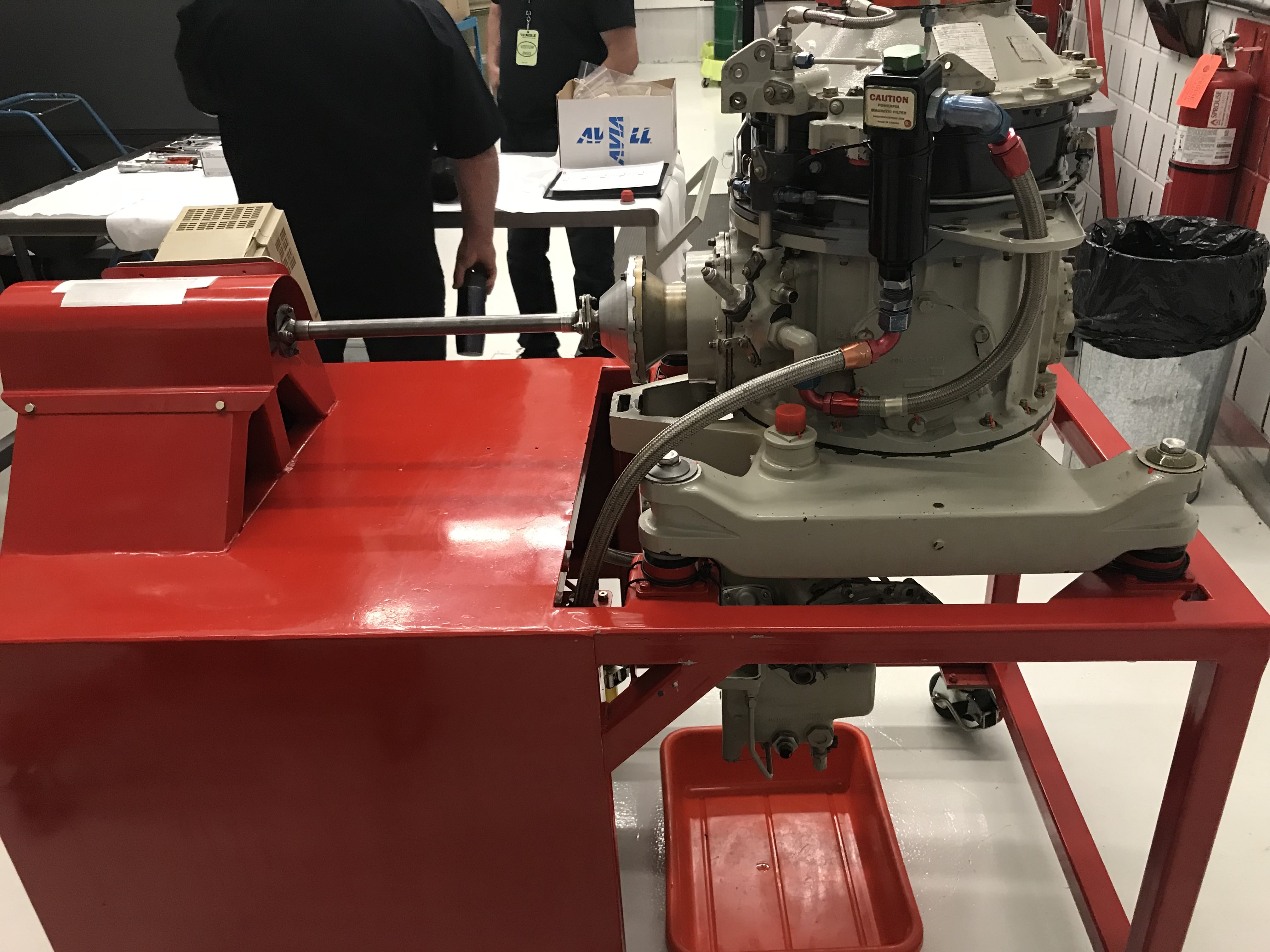 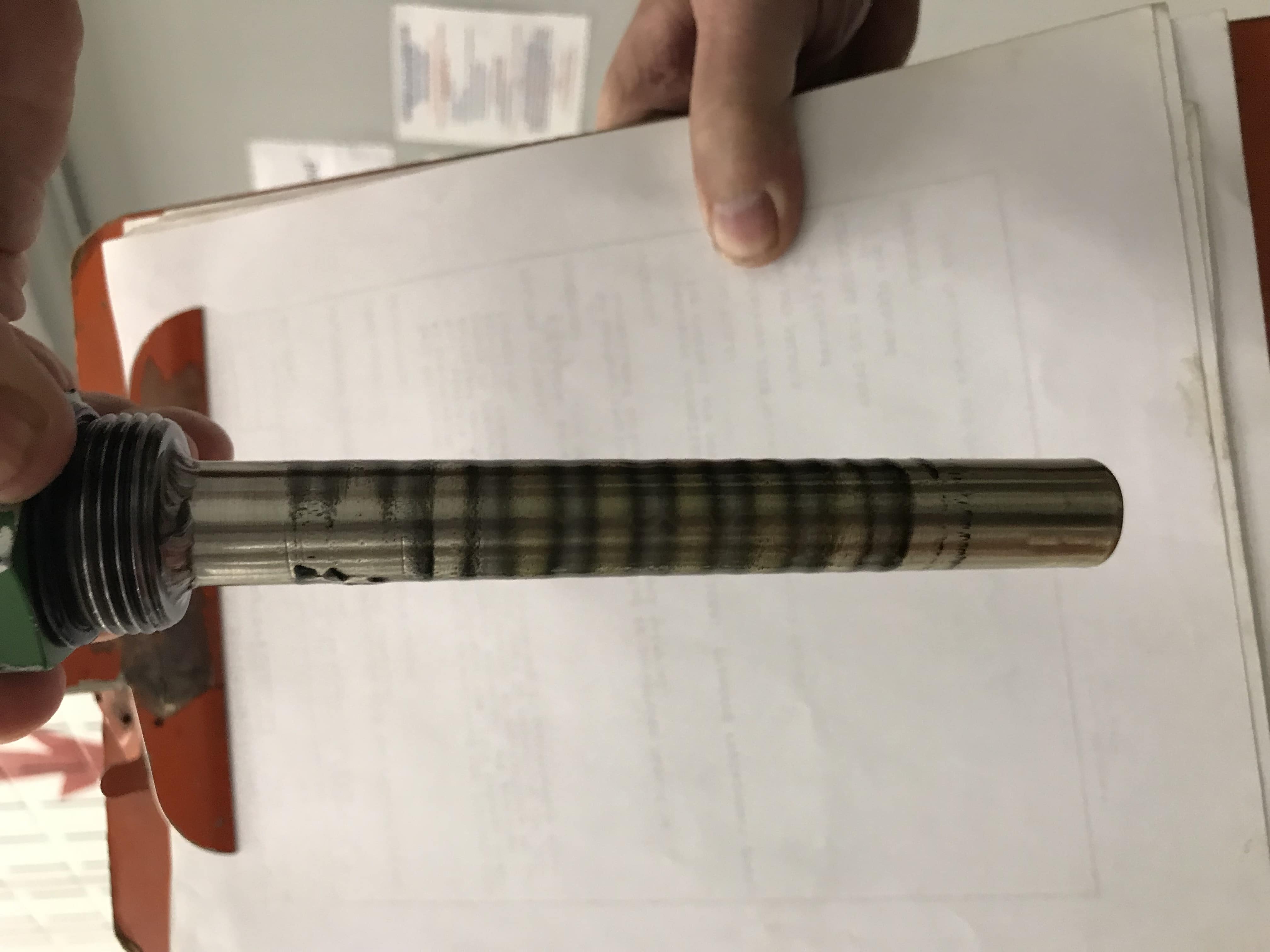 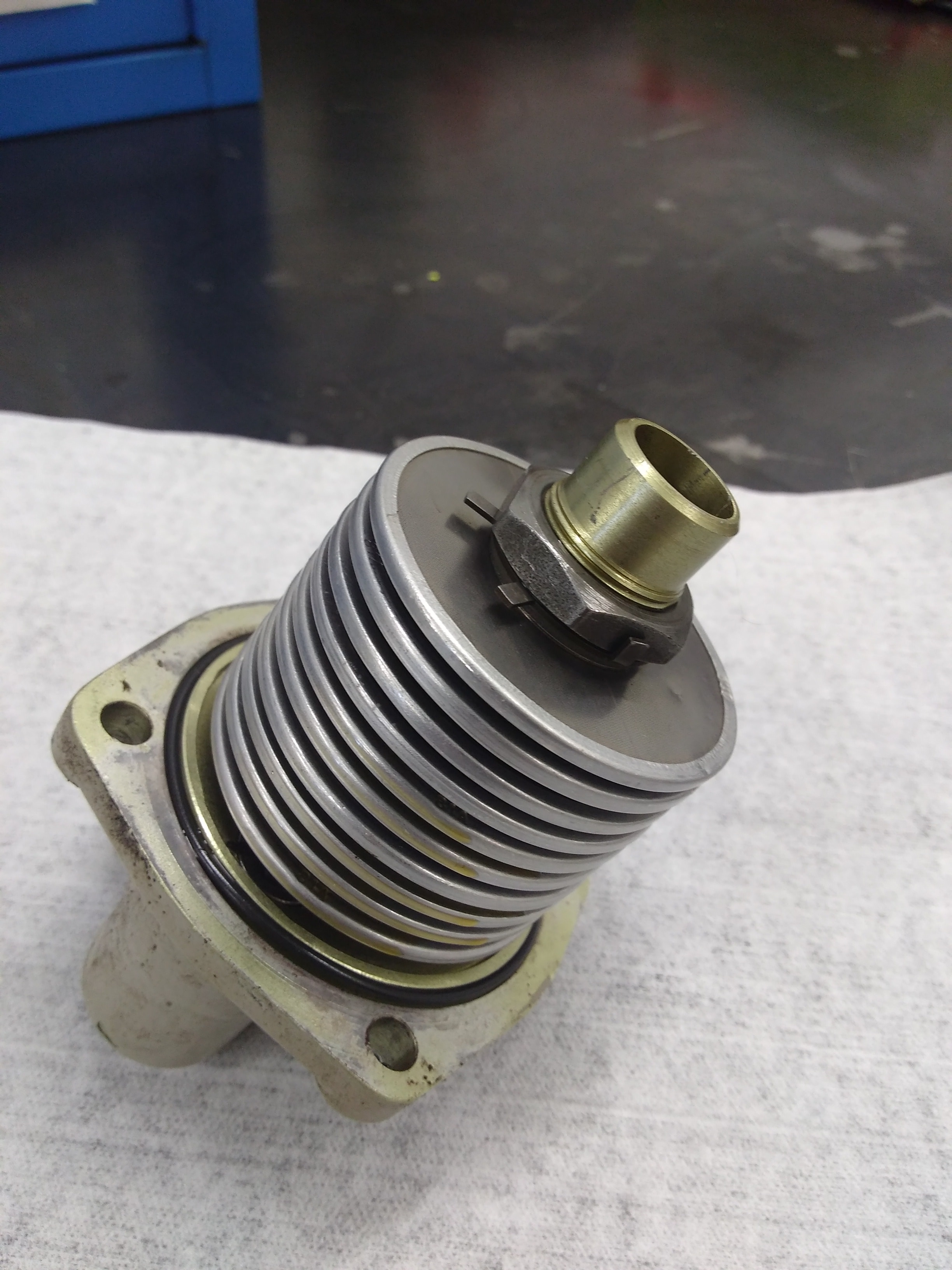 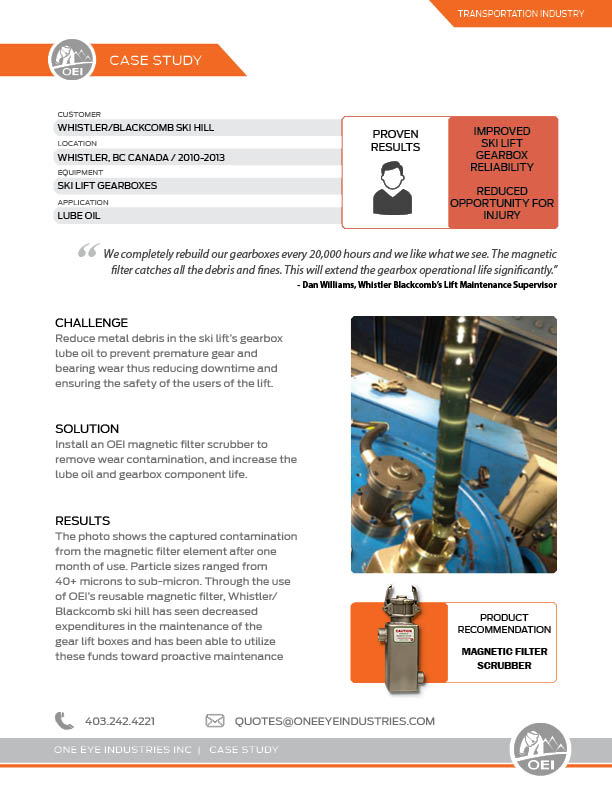 The challenge was to reduce metal debris in the ski lift’s gearbox lube oil to prevent premature gear and bearing wear thus reducing downtime and ensuring the safety of the users of the lift. 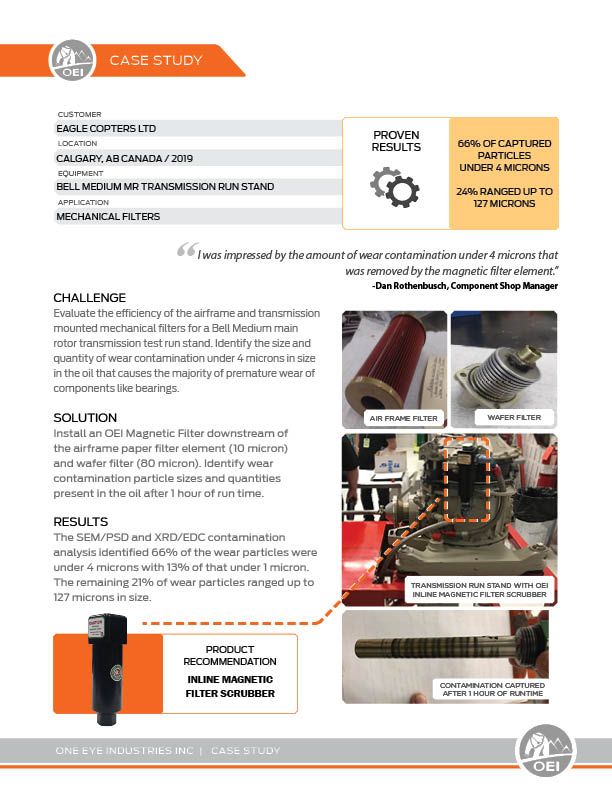 Evaluate the efficiency of the airframe and transmission mounted mechanical filters for a Bell Medium main rotor transmission test run stand. Identify the size and quantity of wear contamination under 4 microns in size in the oil that causes the majority of premature wear of components like bearings.

In 2006, Rob Bekker purchased a used Kenworth semi-truck with a CAT 3406 engine with 70,000 km runtime. Running up to 11 hours a day, with extended idle times throughout the winter, the truck needed a filter that would allow Bekker to maintain a 10,000 km oil change interval. 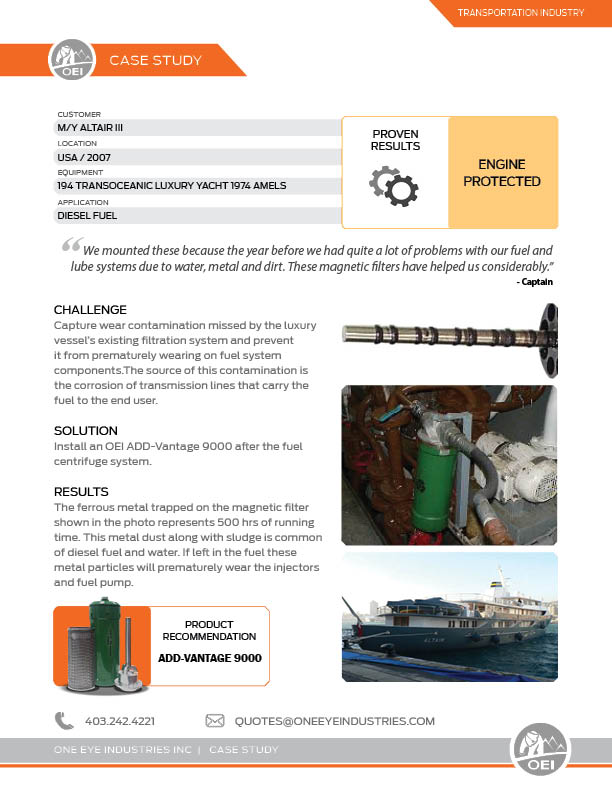 The challenge was to capture wear contamination missed by the luxury vessel’s existing filtration system and prevent it from prematurely wearing on fuel system components.The source of this contamination is the corrosion of transmission lines that carry the fuel to the end user. 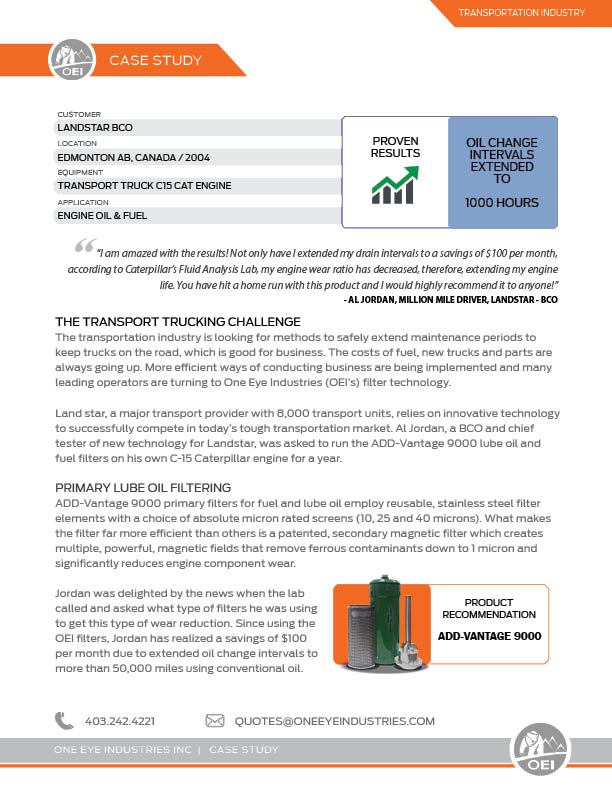 The transportation industry is looking for methods to safely extend maintenance periods to keep trucks on the road, which is good for business. The costs of fuel, new trucks and parts are always going up. Land star, a major transport provider with 8,000 transport units, relies on innovative technology to successfully compete in today’s tough transportation market. Al Jordan, a BCO and chief tester of new technology for Landstar, was asked to run the ADD-Vantage 9000 lube oil and fuel filters on his own C-15 Caterpillar engine for a year. 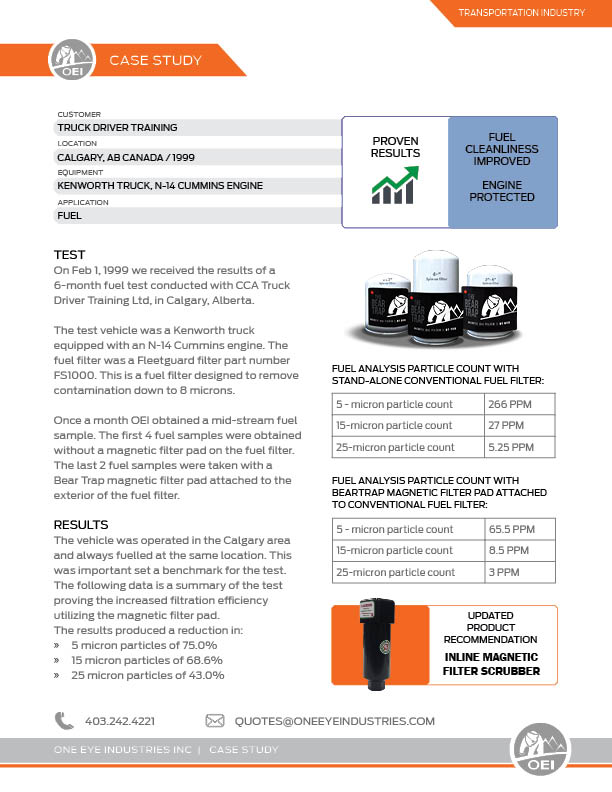 On Feb 1, 1999 we received the results of a 6-month fuel test conducted with CCA Truck Driver Training Ltd, in Calgary, Alberta. The test vehicle was a Kenworth truck equipped with an N-14 Cummins engine. The fuel filter was a Fleetguard filter part number FS1000. This is a fuel filter designed to remove contamination down to 8 microns. Once a month OEI obtained a mid-stream fuel sample. The first 4 fuel samples were obtained without a magnetic filter pad on the fuel filter. The last 2 fuel samples were taken with a Bear Trap magnetic filter pad attached to the exterior of the fuel filter.

Transmasivo, through the use of bio-fuels, was trying to reduce their emissions and wanted a filtration medium that would do the same while working efficiently on their bus line. Traditional filtration is incapable of removing contamination below 10 microns which causes damage to the fuel and oil system components, impedes the burn of the fuel, and increases emissions. 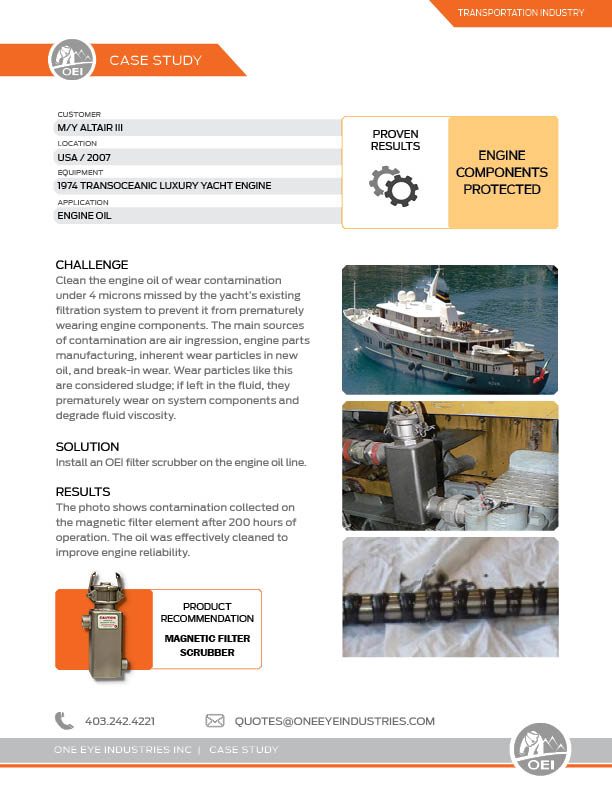 The challenge was to clean the engine oil of wear contamination under 4 microns missed by the yacht’s existing filtration system to prevent it from prematurely wearing engine components. The main sources of contamination are air ingression, engine parts manufacturing, inherent wear particles in new oil, and break-in wear. Wear particles like this are considered sludge; if left in the fluid, they prematurely wear on system components and degrade fluid viscosity. 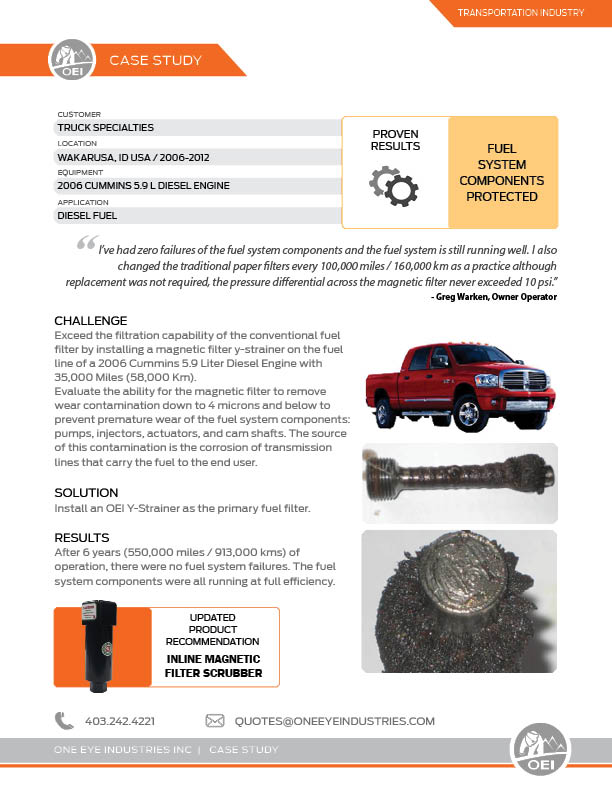 The challenge was to exceed the filtration capability of the conventional fuel filter by installing a magnetic filter y-strainer on the fuel line of a 2006 Cummins 5.9 Liter Diesel Engine with 35,000 Miles (58,000 Km). Evaluate the ability for the magnetic filter to remove wear contamination down to 4 microns and below to prevent premature wear of the fuel system components: pumps, injectors, actuators, and cam shafts. The source of this contamination is the corrosion of transmission lines that carry the fuel to the end user. 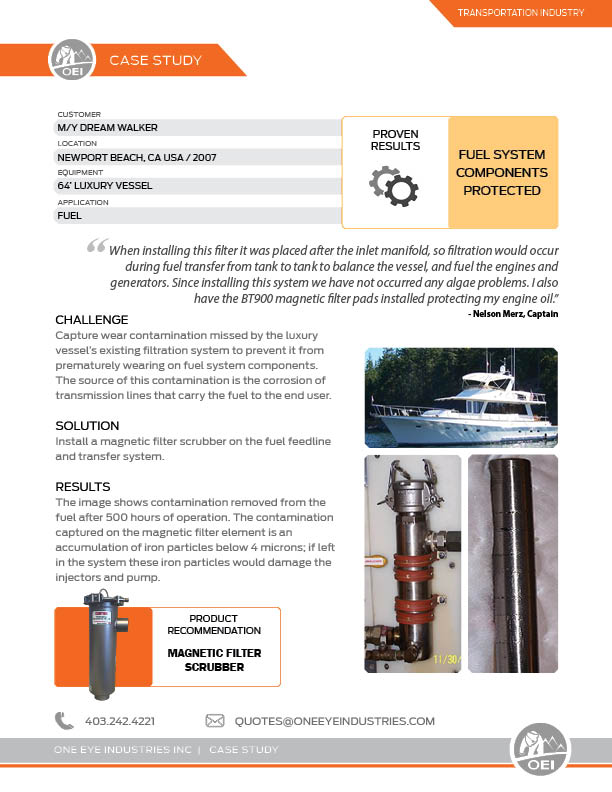 Capture wear contamination missed by the luxury vessel’s existing filtration system to prevent it from prematurely wearing on fuel system components.The source of this contamination is the corrosion of transmission lines that carry the fuel to the end user. 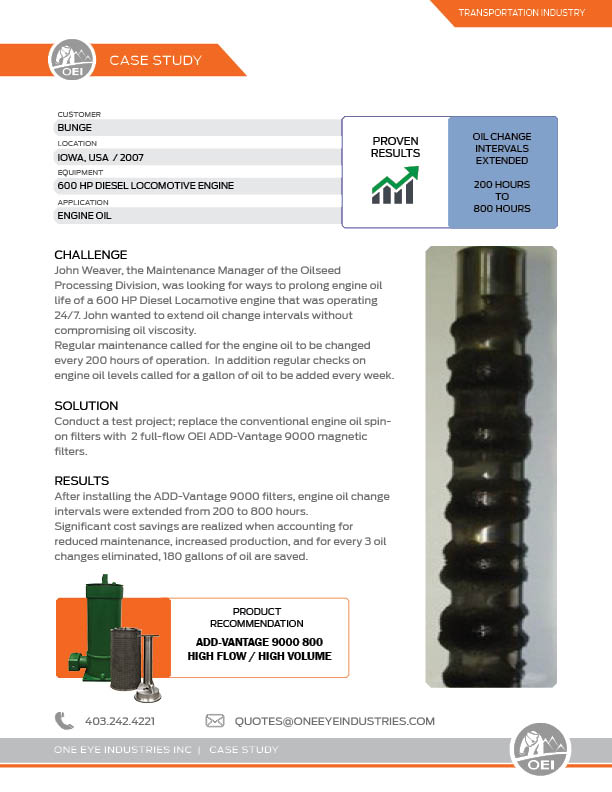 John Weaver, the Maintenance Manager of the Oilseed Processing Division, was looking for ways to prolong engine oil life of a 600 HP Diesel Locamotive engine that was operating 24/7. John wanted to extend oil change intervals without compromising oil viscosity. Regular maintenance called for the engine oil to be changed every 200 hours of operation. In addition regular checks on engine oil levels called for a gallon of oil to be added every week. 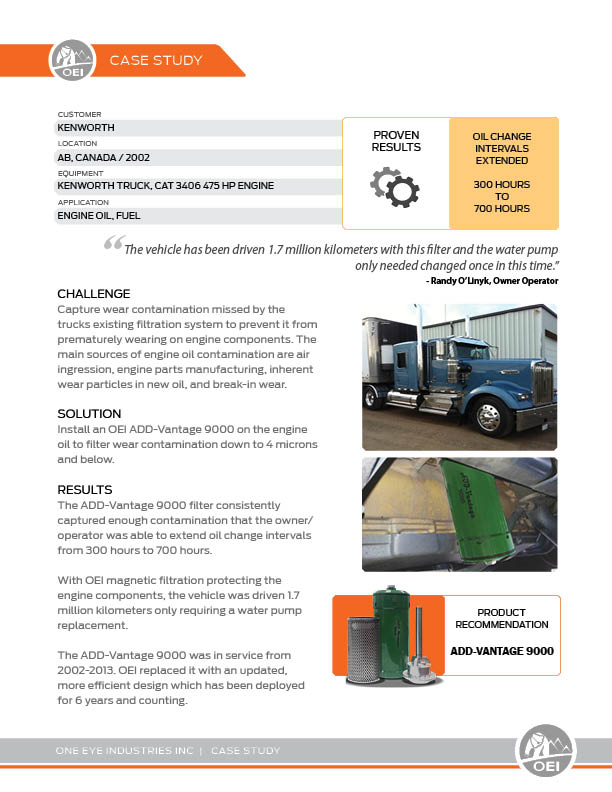 The challenge was to capture wear contamination missed by the trucks existing filtration system to prevent it from prematurely wearing on engine components. The main sources of engine oil contamination are air ingression, engine parts manufacturing, inherent wear particles in new oil, and break-in wear. 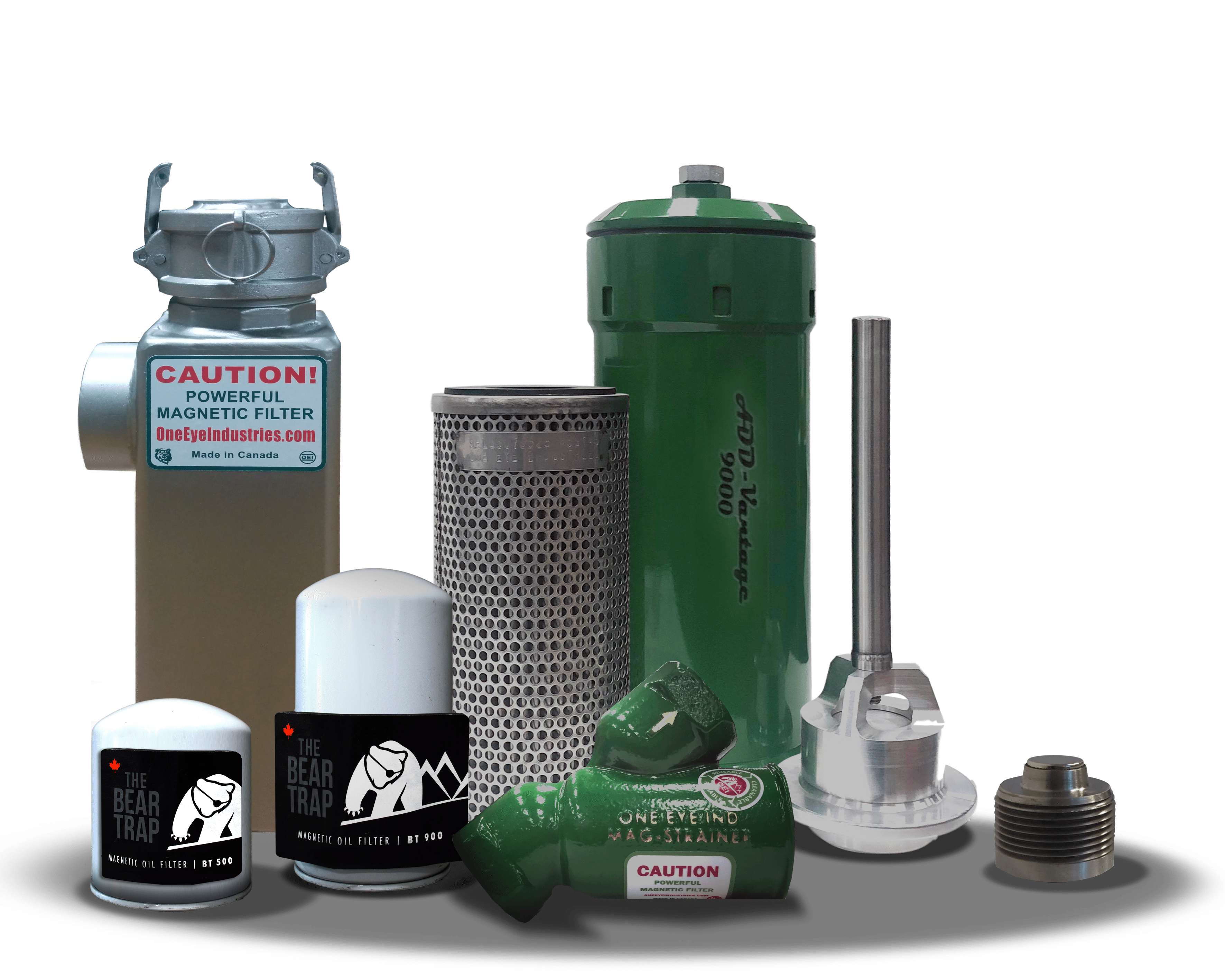 Use of the OEI Data Form will provide the necessary specifications for OEI to deter- mine which product is right for you. 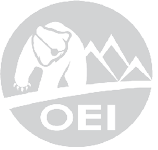